Getting dressed made easy *Guest Article*

07.11.2019
Tips & Tricks
Everyone seems to know it. Sometimes dressing in the morning can take forever and is no fun at all. Our guest author Rike Drust tells us how to solve this situation with fun and games in her column about the daily dressing dilemma.

"Why can the weather do what it wants, but I can't?" My five-year-old daughter stands desperately and quite undressed in the hallway. I can understand her well. The weather can rain or freeze as it pleases, but only she has to put on so many things that pinch, bump or are too small, too shaggy and everything else. Every morning she sits in front of the wardrobe and has to think it through. Even the choice of underpants can take forever. At first, she always selects the socks and then the leggings. When putting on the leggings, it is important that the socks sit exactly at the same height and do not make an oversized bump under the leggings. Otherwise she has to start all over again. And yes, we haven't even thought about a top yet. The morning dressing lasts forever and with all understanding I occasionally have the need to eat my fist. Because every morning we hear: "Hurry up. If you're not dressed immediately, you'll be late for kindergarten and Dad will be late for work because of this."

No Joysparkling when sorting out

We have tried an incredible amount to make the dressing in the morning more stress-free for everyone. For example, the evening before we picked out the clothes together and put out the complete outfit for the next morning, which had been tried on and approved by the little one. Pretty naive, because why should it be different with clothes than with food? Children can easily celebrate the cucumber in the evening with standing ovations as the best vegetable in the world and still choking their necks for it the next morning. So a new approach was needed. We took all her clothes out of the closet and sorted out what she considered too long, too short, too baggy, too rough and so on. At this point I would like to greet the already mentioned cucumber, because the next morning my daughter wanted to put on exactly the items that we had sorted out the day before.

Now there are probably people who think my daughter is bossing us around pretty much. And sometimes, when I'm particularly tired or stressed at work, I even think so myself. But basically I like it better that way than her not daring to express her opinion when she's five years old already. That's why in the morning, instead of orders and threats, we rather plan on a rather long time buffer for getting dressed. And it was precisely with this buffer that I came up with the idea for our personal super-dressing hack, which I would now like to reveal to the sympathetic parents.

In one of those sheer endless moments of dressing, I sat waiting in the nursery. And while I watched the changing seasons dreamily through the window, I had the idea. I grabbed one of the stockings, pulled it over my hand and let it speak. His name was Klaus and he felt terribly cold. Only a great, warm child's foot could make sure that he wouldn't freeze that badly anymore. Lo and behold, my daughter smiles at her socks-hand, caresses him lovingly, assures him that he doesn't have to freeze any more and simply puts him on. And it wasn't even autumn yet! She called the other stocking Mouse, and because Mouse also jittered a lot, she was pulled over the warming foot in no time at all.

Children prefer to listen to stockings than to their parents

Since this realization almost every piece of clothing speaks with us. Sometimes it sounds really crazy, but in the morning singing stockings help us so much more than a hectic "hurry up" or rolling eyes. I realized through this gambling that my daughter doesn't need more instructions in the morning, she needs more allies. With whom she can rave about the stupid weather and where she is the big one and can help. Her little friends give our dressing stress in the morning more meaning than the abstract "Daddy has to be at work". Now her stockings are called Klaus and Mouse, and her leggings are the famous Siamese snake twins. My daughter is much more relaxed in the morning. This morning, for example, only one person was mad at me, and that was her backpack. It would have had to go to the kindergarten today because of a field trip, which I had totally forgotten. Now it's hanging here at our coat rack, looking at me with big eyes and I could swear that its usually really friendly face just shook his head reproachfully. 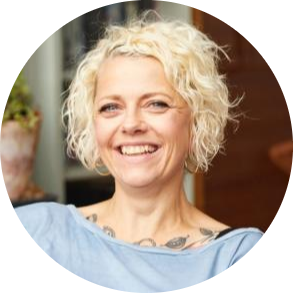